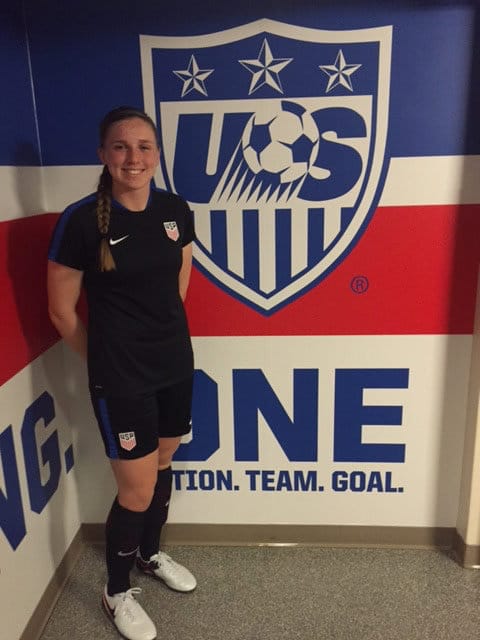 Last month I had the incredible experience of training with the U-18 U.S. Women’s National Team at the U.S. Soccer National Training Center in Carson, California. I had been scouted by the National Team coaches at the ECNL event in San Diego, and received an invitation to attend the training camp two days after we returned from this event. I was extremely excited to receive this opportunity–wearing the U.S. soccer crest and representing our country is a privilege that very few players receive, and I am honored to be one of them.

We arrived in Carson on Saturday, April 16th, and the rigors of camp began almost immediately. We had a training session that evening to get our legs moving after a long day of travel. It was amazing to be playing with 25 of the best players in the nation, and to see their abilities as well as their dedication to the game in action. That night, we were given instructions regarding various forms of health and wellness monitoring that we would need to perform. Every morning we were required to fill out a survey regarding our level of soreness and fatigue, level of stress, our moods, and any injuries we may have had. Additionally, we were required to monitor our resting heart rates, as well as take part in daily weigh-ins and hydration tests. With the high volume and intensity of our training sessions, we had to ensure that we were properly caring for and preparing our bodies. 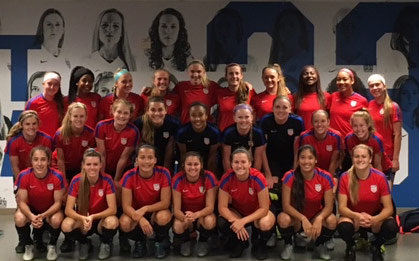 We had two training sessions a day–one in the morning and one in the evening. The other three goalkeepers and I began every session working with the goalkeeper coach until we were needed for drills with the rest of the team. The speed of play was very fast, and the sessions were extremely physical and competitive, which was a lot of fun for me. We also had team meetings every night to watch film, listen to scouting reports on our opponents, or talk about our plans for training the next day. The other goalkeepers and I would stay with the goalkeeper coach after the team meetings to watch film from our training sessions and analyze our technique. Some days, we also had extra training sessions while the field players rested.

Over the course of the week, we played 2 games. On Tuesday we played Long Beach State University and tied them 2-2. On Friday, we played the U-17 Women’s National Team, who were also in camp that week in Carson. The U-17 WNT is preparing for the U-17 Women’s World Cup in Jordan this Fall and have been in camp together and playing games fairly regularly, so it was a great opportunity for us to play a very skilled, well organized team. We ended up losing the game 2-1, but it was still a great experience.

I learned a lot when I was at camp, about the game and myself as a player. I am looking forward to hopefully being back in training camp with the National Team this summer. My goal is to travel with the team to Ireland in October to play in some international friendlies and earn my first cap!