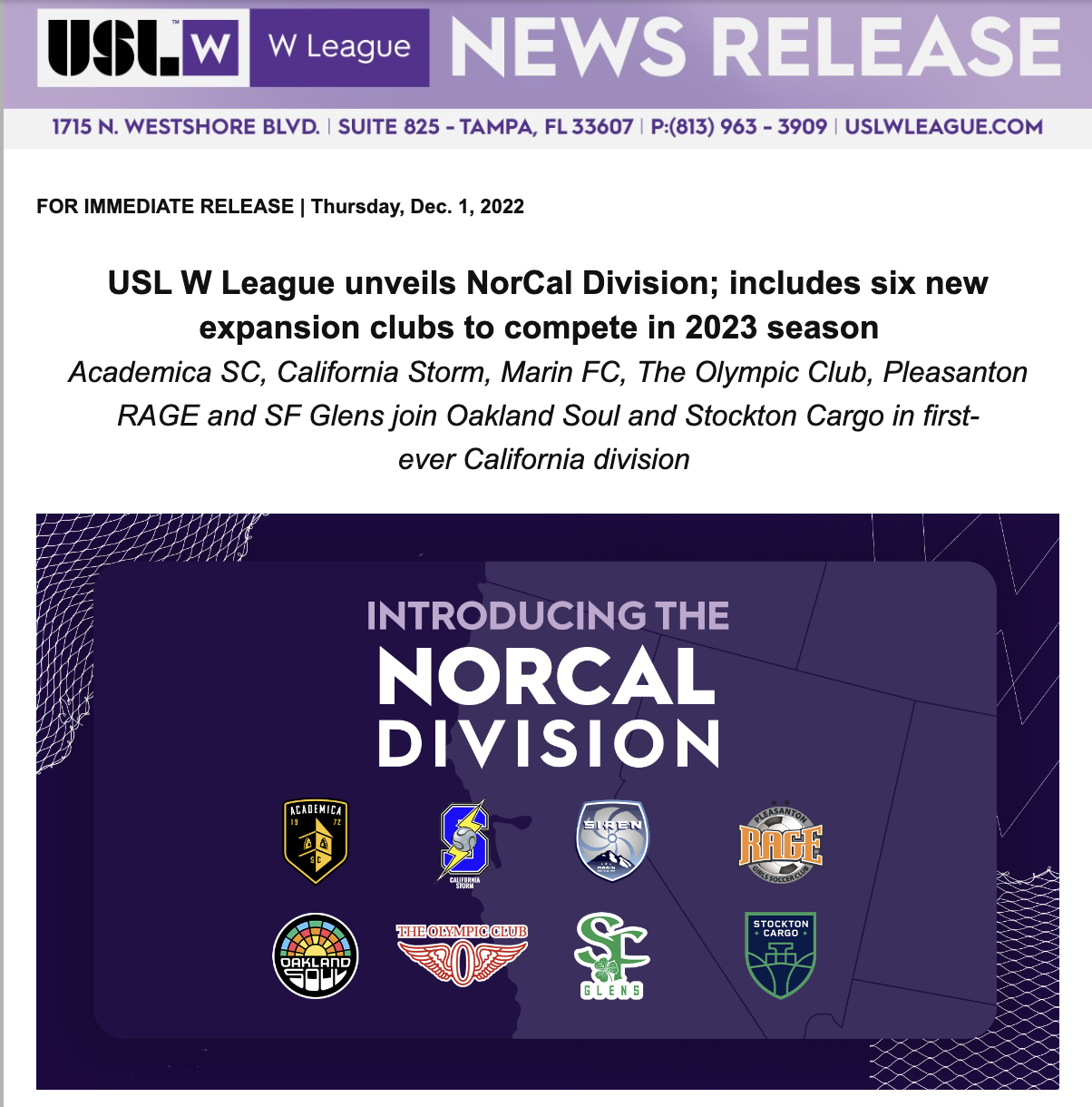 “The establishment of a NorCal Division is a watershed moment for the W League,” said Amanda Vandervort, USL Super League and W League President. “Paired with our Northwest Division, the W League’s footprint is now truly national, which is what we’ve always envisioned. Creating this division with clubs of this caliber and notable sporting history is thrilling and we look forward to seeing these clubs excel on and off the pitch.”

The division welcomes clubs of several different backgrounds and histories in the sport. Four of which already compete, or will take the field in 2023, as part of the USL ecosystem in USL Championship or League Two.

“We’re so excited to welcome six highly competitive clubs, bringing the league to over 60 clubs in its sophomore season which is an incredible milestone,” said Joel Nash, USL Vice President of Youth and Pre-Professional Properties. “Northern California is home to some of the county’s most vibrant and talented soccer, from players and clubs to fans and their communities and I believe these founding clubs are a perfect representation of that.”

Academica SC was founded by a group of Portuguese immigrants from the Azores Islands in 1972. 50 years later, Academica will join the W League and showcase talent from the 209 – Turlock, Calif. The club’s mission is to have players who find pride in representing their communities while competing at the highest level. Academica also announced that the club will field a men’s side in League Two.

The California Storm was founded in 1995 by Jerry Zanelli and has had a host of notable players play for the Storm, including Brandi Chastain, Sissi and Julie Foudy.

“The California Storm is very excited to be part of the launch of the USL W League in California,” said Jamie Levoy, Cal Storm Executive Director. “We need more options for women to play here in the U.S. The USL has proven to be a successful organization that promotes professionalism for the athletes and fans. We look forward to working with them to continue to grow the game for women and inspire the next generation.”

Founded in 2004, Marin FC was created specifically to support the development of elite competitive soccer teams and players in Marin County. The team’s mission statement boils down to ‘inspire and advance.’ Marin FC’s W League team, the Siren, completes the club’s parallel player development pathway as the club also has a men’s squad, the Legends, that compete in League Two.

The Olympic Club, founded in 1860, is one of America’s oldest athletic clubs. The Olympic Club has been a home for elite amateur athletes since its inception, with over 90 Olympic Games medalists in its history. The Winged “O” has fielded locally competitive women’s soccer teams since 2002.

“The Olympic Club prides itself on fostering athletes pursuing the highest levels of amateur sports in their respective fields of play,” said Nick Lusson, Olympic Club Athletic Director. “We’re thrilled to further accomplish that objective by bringing our women’s soccer team to the USL W League. It’s absolutely vital that we have a robust and high-quality league like this on a national level and we’re honored to get to play a role in making that happen here in Northern California.”

Established in 1983, Pleasanton RAGE is committed to holistic player development with a particular focus on leadership and community service.

“Pleasanton RAGE is thrilled to be joining the USL W League,” said Erin Sharpe,  Director of Coaching at Pleasanton RAGE. “The investment that the W League is making to improve and grow the women’s game at the pre-professional level in Northern California is an important one and we are proud to be a part of it.  The core tenets of the USL W League align with our own and we look forward to providing an exceptional experience for our players and fans as a member of this great organization.”

The San Francisco Glens were founded in 1961 by Dr. Michael McFadden as an adult soccer team in the local amateur league with players primarily from the Irish-American community. Today, the Glens have grown into the largest soccer club in The City, with over 1,100 players at various levels. The Glens’ mission is to give local players of all backgrounds the opportunity to compete at the highest level their dreams and determination will allow.  The club also recently broke ground on a new waterfront stadium on Treasure Island.

In addition to the six clubs, previously announced clubs Oakland Soul and Stockton Cargo will also compete in the NorCal division. 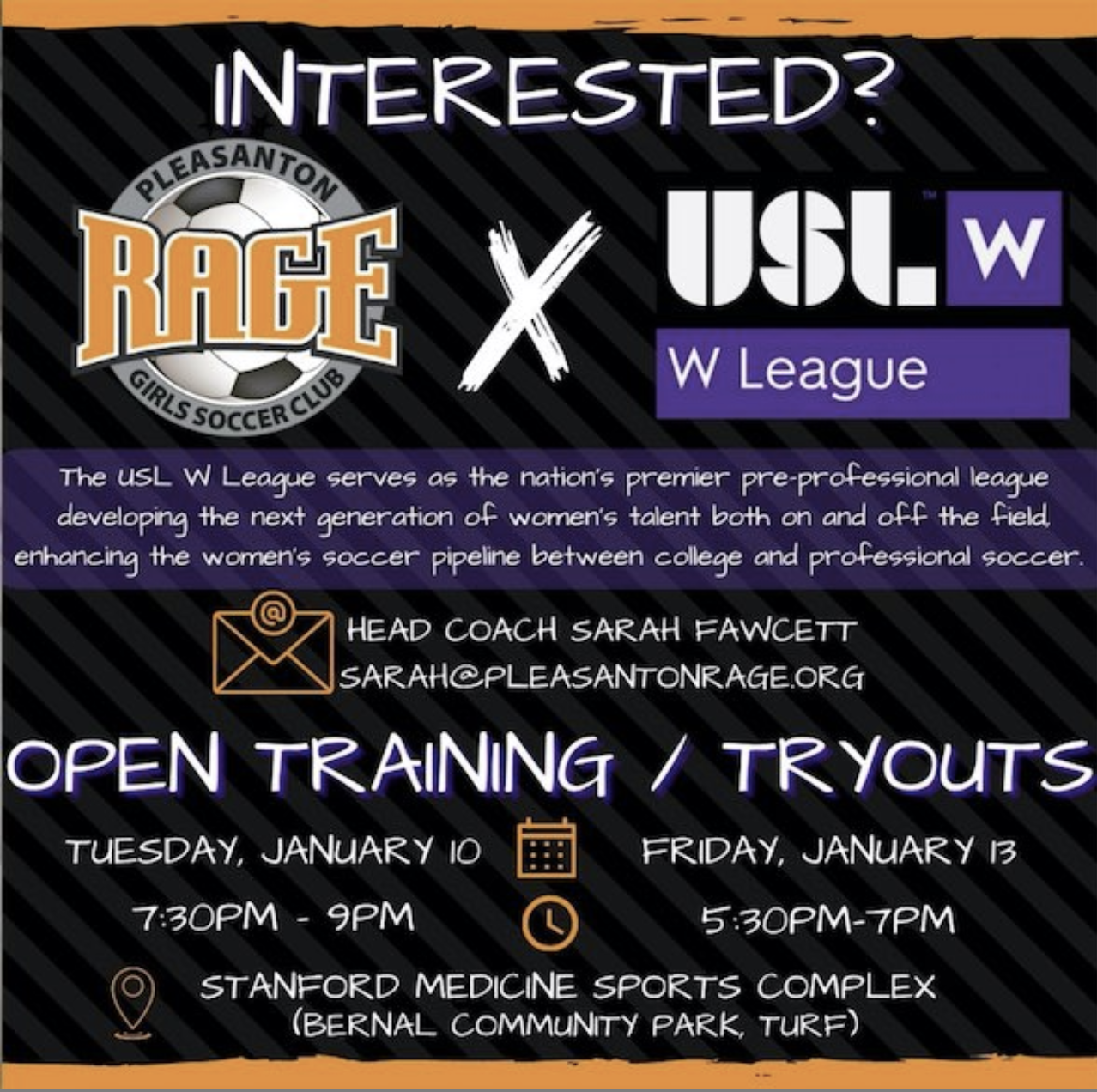