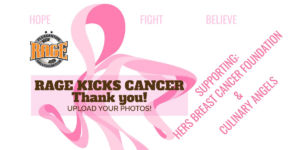 The evening started with crafts and activities that raised awareness about breast cancer.  The girls made bracelets, posters, and flowers and took spirited photos at our selfie booth.  They also celebrated with water balloon challenges, and a Pink Cake Walk. There was also a special quilt table, where players were invited to create squares that will be put together into a quilt that will represent our unity and hope in the fight against breast cancer.  The girls then had the opportunity to listen to several inspirational speakers. We heard from representatives of HERS Breast Cancer Foundation and Culinary Angels, and then from two of our own RAGE moms who have battled breast cancer. The emotional stories helped bring awareness and fostered a sense of purpose for RAGE Kicks Cancer.  Finally, the RAGE coaches had a field goal kicking contest. Congratulations to Walter Pratte for kicking the farthest.

It was incredible to witness a sea of pink, coming together to give back to our community.  As an all girls soccer club, RAGE has a special motivation to raise awareness for breast cancer.  Beyond awareness, this community service project created solidarity, and raised nearly $10,000 to support local women who are fighting breast cancer.  The RAGE Board of Directors also agreed to match donations, up to $5,000, bringing the total donations to nearly $15,000.

On behalf of RAGE Girls Soccer club, I am proud to say that we are living up to our Mission to empower our players to reach their full potential through service and leadership programming.

Thank you for making RAGE Kicks Cancer a resounding success!