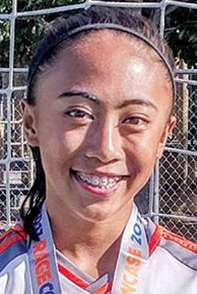 Tracy’s Ashleigh Garcia is on her way to the top levels of girls soccer now that she has competed among the elite athletes in her sport in the western U.S.

Ashleigh, 13, an eighth-grader at Discovery Charter School and a member of the Pleasanton Rage team, participated in this past weekend’s U.S. Youth Soccer Olympic Development Program 2017 Thanksgiving Inter-Regional in Boca Raton, Florida.

She joined a team of 17 girls on the U.S. Youth Soccer Region IV (West) under-14 team, representing 14 western U.S. states, in competition against teams from the Midwest, East and South regions.

The weeklong event started with training Nov. 18 and continued with games throughout the week. Ashleigh was a midfielder on the West team, which went 0-1-2, including a 0-0 tie with the South team, the top team in the tournament, on Thanksgiving Day.

The tournament is a showcase where players can meet college scouts and qualify for further training and development with U.S. Youth Soccer’s top coaches.

While at the event, Ashleigh teamed up with Emma Corcoran, a member of Santa Rosa United soccer club and one of Ashleigh’s West Region teammates, to sell stickers and T-shirts to raise money for people affected by the recent wildfires. The duo raised more than $5,000 for victims of the October wildfires in Sonoma County, including four of Emma’s teammates whose homes burned.

Participating in the Thanksgiving Inter-Regional was Ashleigh’s most prestigious accomplishment yet. Previously, she was among 44 girls in the Cal North Olympic Development Program under-14 player pool and was a standout in the Region IV ODP camp in Colorado in June and July. She was also among 18 all-tournament players in the Region IV Championships in Seattle in January. She was selected for U.S. Youth Soccer player development programs for Cal North Region 8 and Cal South.

Her next step is to participate in the Cal North Player Development Program “id2” training Dec. 7-10 in Casa Grande, Arizona. It will be her chance to qualify for the U.S. National team and will give her more exposure in front of college recruiters.