Join the members of Pleasanton RAGE and stay in touch

RAGE IS BACK ON THE FIELD and week 1 is in the books!

It was a successful week back on the field in our camp format and it was a pleasure to be working with our players on the pitch once again! It was great for the girls to have fun being together again while working on ball mastery and soccer fitness! Most importantly, health and safety is always our number one priority; our environment requires that everyone is always maintaining required physical distancing, we are training in small groups and have thorough sanitation and health screening procedures. Thank you to all of the hard work from RAGE leadership and to all who have pitched in to help make our returning to the field a success! We can’t wait until next week! GO RAGE!!!! 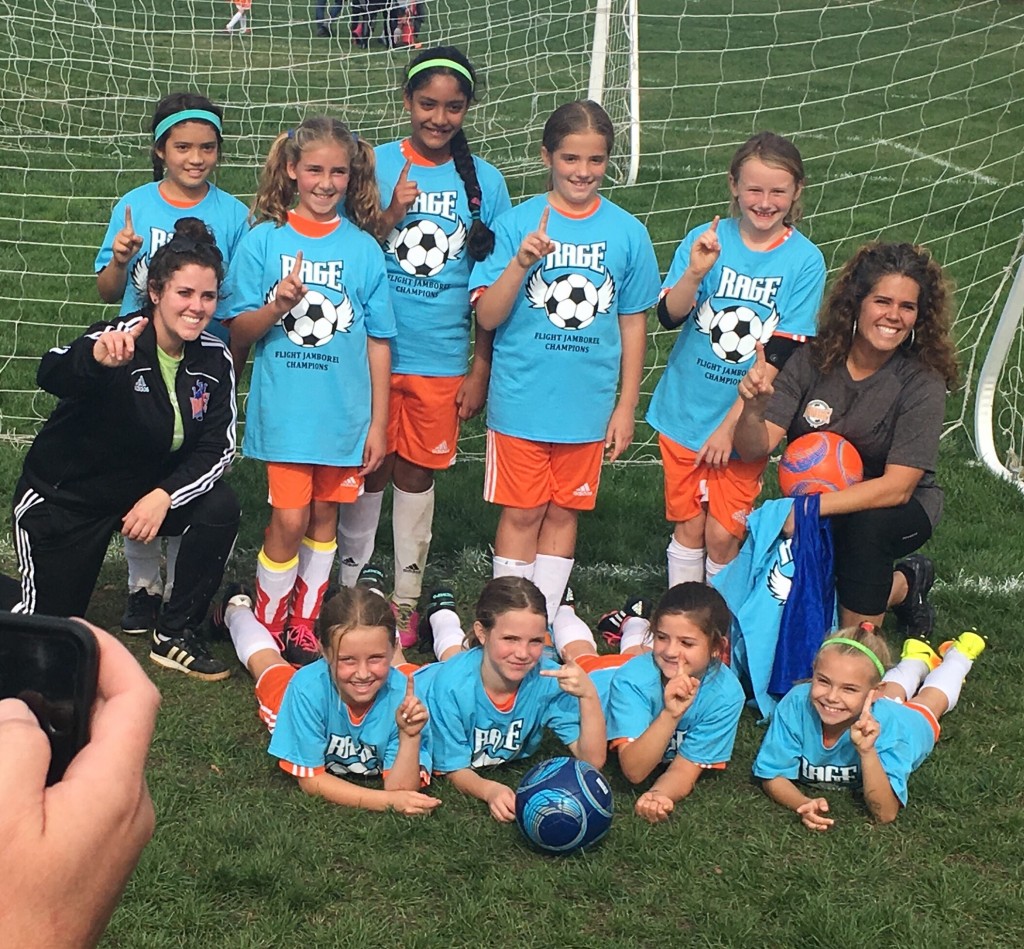 On a weekend where the average temperature was 100 degrees, Pleasanton Rage Impact, U14 Flight, battled the heat and some very good competition from Pleasanton Rage and Walnut Creek to with the WC Fall Classic. The Impact won the championship with a very clean slate: going 4-0 in games played without giving up a goal.

Pleasanton Rage U16 Skyfall battled extreme heat to win the Walnut Creek Classic Tournament on September 25.  They went into the final undefeated (2 wins and 1 tie) and shut out Walnut Creek Fusion 4-0 to take the championship title.

The U14 Flight OutRageOus girls wrapped up their 2015 Pleasanton Rage season winning the California Cup in Fremont.  The girls showed great character and resilience during the tournament, and they staged a dramatic come-from-behind victory in the final minutes of the championship match.
OutRageOus never gave up as they battled against Rage Revolution, another Pleasanton team.  The final goal was scored by Constanze Huebner with 4 minutes remaining in the game – a long shot that found the upper corner of the goal, despite outstanding goal-keeping.  Earlier in the second half, Jordyn Self tapped a beautiful cross from Abbey Baer into the net to tie the score.  The match ended with a 2-1 victory for OutRageOus.  The entire OutRageOus team contributed to the win with tremendous defensive and goal-keeping efforts as well.

The U12 Flight OutRageOus team finished their season with Rage by winning the Fremont Tournament of Champions.
The girls played with tremendous heart and remarkable character.  They trusted and supported each other, and they gave everything they had.  Every player contributed, and they played like a truly great team.
The victory in Fremont came one week after winning the U12 Flight Jamboree and after earning first place in the U12 Flight regular season.
The final match at the Fremont Tournament of Champions ended in dramatic fashion.  OutRageOus was competing against the Danville Mustangs, finishing regulation time in a 0 – 0 tie.  With 30 seconds remaining in the second overtime session, Izzy Wilbur made an excellent cross to the center.  Ellie Flora tapped the ball to Abbey Baer, who sent the ball into the top right corner of the net.
The OutRageOus defense was remarkably strong and did not allow a single goal in the entire tournament.  The girls finished the Tournament of Champions with a record of 3 wins, 0 losses, and 1 tie; and they outscored their opponents 11 – 0.
OutRageOus’ team record for 2014, including the regular season, the U12 Flight Jamboree, and the Fremont Tournament of Champions was 13 wins, 2 losses, and 2 ties.  Excluding penalty kicks in the Jamboree, they scored 44 goals this season and only allowed 5 against them.

U14 Hawk: Undefeated & Un-scored on in Walnut Creek

undefeated and un-scored upon

On the opening day of pool play, The Hawks faced a pair of team teams in their first test of the

tournament. In game 1, The Hawks got off to a fast start with a driving goal from Meena Alexander.

The defense, anchored by Kristen Greene frustrated the Walnut Creek attackers and turned away all

advances. The Hawks took complete control of the game in the second half. Hawks keeper Carly

Muser did not face a single shot as the defense neutralized anything in their zone. Eunice Jung

the game ended 2-0. It was more of the same in game 2 as the Hawks controlled the tempo of the

game facing the Walnut Creek Wildcats. Megan Stewart started the scoring with a driving shot off a

direct kick that found the corner of the net. Cindy Zhao and Colleen Eichhorn combined to provide

perfect protection for the Hawks keepers. Olivia Murphy broke free late in the first half and drove the

ball into the net for a perfect finish to the half. The Hawks continued to dominate the second half

Day 2 opened with an early match up against the Dublin Earthquakes. The game opened in a tight

pushed to ball forward to a waiting Carly Muser and the game winner for a 1-0 finish. The tight battle

earned the Hawks a spot in the next round!

had no luck breaking through the defense to pressure the ball. The Hawks secured a score in each

After the final whistle, the coaches, Steve Nimmo and Tom Zhao watched as the Hawks hugged

each other and celebrated a successful tournament. The Hawks, with their outstanding team play

and support throughout the tournament, earned the recognition of completing the weekend,

undefeated and un-scored upon at the 2014 Walnut Creek Fall classic.

The U-16 Hot Shots took 3rd place in the Walnut Creek Fall Classic. The team got off to a rocket start with a 7-1 win over a team from Danville. Scoring started early in this match up with the Hot Shots stampeding to a 3-0 advantage in the first 89 seconds. After a highly competitive game against the Walnut Creek Fury, the Hot Shots were in 1st place going into Sunday.’s play. After losing a heart-breaker to the Walnut Creek Swat 1-0, the team advanced to the playoffs against another Pleasanton team, the Ladyhawks, and won.